San Diego County Supervisor Jim Desmond rose from being a San Marcos City Councilman, to Mayor of that city and was elected to his current position last year. Competitive Edge had the pleasure of conducting extensive polling for Jim in both his Primary and General Election races. In the latter, Jim racked up the most votes of any Republican elected official in the county. With a demeanor that’s approachable and engaging, it’s not hard to see why Jim is such a successful vote-getter.

When I was a kid I wanted to grow up and be an astronaut. I didn’t quite make it, but I was close, becoming a pilot!

Which accomplishment as an elected official are you proudest of?

It may sound trivial, but the accomplishment I’m most proud of when it comes to government is getting rid of the parking spaces for elected officials in San Marcos. When I became Mayor of San Marcos, myself, along with the City Council and City Manager, had our own designated spots at the front of the building. I always thought that was silly because we serve the people of San Marcos. I was able to make the change and have all elected officials park in the normal parking structure.

I love Eric Clapton, he’s someone I grew up watching and listening to. I think he’s the best guitar player in the world.

Growing up I loved rock and roll, which is where my love for Clapton comes from. When I’m driving around town now, I still like listening to rock and roll. I have XM radio so the two stations I listen to the most are classic rewind and underground garage.

Having lived in San Diego the majority of my life, I love Mexican food. My go-to spot is Mr. Taco in San Marcos. The Carnitas Burrito ($5.75) is my usual order.

The best professional advice that I ever received came when I first got my job at Delta. There was an old Capitan who told me to ‘keep your first wife.’ Best advice I’ve ever received! Love you, Kerri!

I feel like I’ve received many lucky breaks throughout my career, probably the biggest one was when I was hired as a corporate pilot. I was going on the path of becoming an engineer and that’s what I got my degree in at San Diego State University. I made the career change to become a pilot and haven’t regretted it at all!

Volunteer! Volunteerism makes the world a better place. I started volunteering within San Marcos and people started giving me more responsibility, which led me to run for City Council and then Mayor.

If I had all the money in the world and could buy one thing, I’d probably buy my own jet. The problem is the cost for upkeep, gas and a hangar it all adds up very quickly. It’s much better to know someone who has a jet!

In 10 years, I see myself retired and traveling around the world. 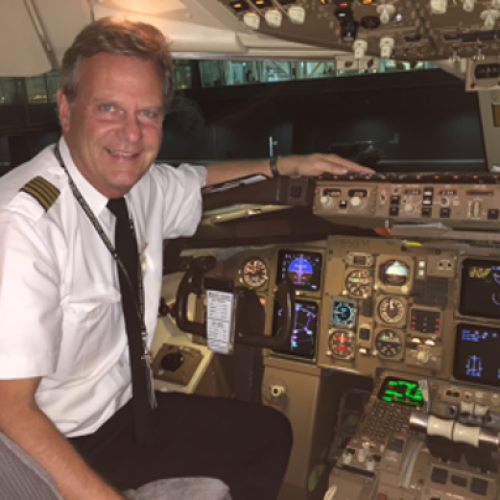 This is Tooltip!
Jim Desmond